‘Pardon?’ I asked Jamie Beattie – our Trust Information Manager who was absent-mindedly humming across our table.

‘My favourite carol. That and ‘In the Bleak Midwinter.’ Snow was falling snow on snow, snow on snow’ he continued.

‘And if snow did fall on snow, (snow on snow), wouldn’t you be snowed in? Just one leaf on the line is enough to stop trains, so what effect would a ‘bleak mid-winter’ have on your commute eh?’ I countered.

Another typical night at the EPR Arms. I say ‘typical’ but actually I’ve not been for a while – trying to cut down unnecessary calorie consumption. Not that beer is unnecessary, but it then leads to lack of control when I open the fridge at home and see some slices of chorizo that will be going off soon (well – in two weeks actually) or a lump of cheese.

So, I am not as regular as I used to be. (That’s chorizo and cheese for you!)

‘You’d need plenty of ‘Winter Maintenance Gritter Driver Cat C Class 2’ wouldn’t you![ii]’ said a voice from over the top of a ‘sloppingly’ full pint of (Badgers Crushed Paw) bitter – hand pulled- just walking back from the bar to join us.

‘How are you doing Tom?’ I said to our new arrival – Tom Watson a surgeon from across the road. Finished for the day. For the week. For Christmas actually.

‘I’ve just finished for the day. The week. For Christmas actually’ he said. I’m absolutely knickered.

‘Been at the Christmas Crackers again Tom? Very good.’ Said Norm – my other fellow drinker – University lecturer. Off for a long, long Christmas break as usual.

‘No – went to panto last night. Brilliant fun. Had to borrow a nephew to get into the spirit of it though’ Tom replied. (see www.brighousetheatre.co.uk)

‘I love Christmas. I love the tradition of it. The Turkey. The Panto. The crackers. The carols’.

‘The long holidays?’ I added sarcastically.

‘So why do you need those Winter Maintenance Gritter Drivers then?' Tom asked.

‘And snow on snow’ added Jamie as he made his way to the bar for a refill.

‘Ah yes – the bleak mid-winter. In my day we used to call them Gritters. And we called bin men bin men, not waste disposal maintenance officers or something equally daft!’ Said Tom.

‘Bin men! I was reading on the BBC an article about inflated job titles. Did you know’, continued Tom warming to his theme, ‘that the Newcastle Metro ticket inspectors are now called Revenue Protection Officers.’

Norm jumped in ‘And if we DO follow America, like we always do, then worse will follow. In one law firm over there I was visiting as part of my University Exchange visit, one morning the receptionist had stepped away from her desk. Placed on the ledge was a sign that read "The Director of First Impressions has stepped away and shall return shortly”. I mean I ask you! She was a Receptionist Not a Director of First Impressions."

Jamie jumped in, (he had been listening in while the landlord re-filled his glass). ‘You may laugh but my career pathway has recently been clarified – I am a now health informatician’.

‘So another trumped up title eh? like ‘Meat Engineer’ (butcher) or Eviction Technicians (aka Bouncer) said Tom.

‘Trumped up job title’ said Tom wiping a trickle of beer from his straight pint glass.

‘No it’s not a new job title actually Tom, I now have wider career choices. I know that I can take exams in Health Informatics and apply for a number of ‘informatics related’ jobs which previously wouldn’t have appealed.’

‘Erh – Yes I guess so!’ I replied as if I knew what he was talking about. (Check end-note for explanation). Rapidly changing the subject, I looked outside and pointed. ‘Look through the window – snow is falling snow on snow. Snow on snow. How Christmassy!’

‘Best get the drinks and food resources co-ordinator (barman) to call for the Winter Maintenance Gritter Driver Cat C Class 2‘s then.’ said Tom.’ Before we’re snowed in!’

‘Yip!’ and raising their glasses, they chorused in unison ‘And a Merry Christmas to you all – whatever your job title is!’

Post Script: After finishing this EPR Arms episode, the author went off by train to the Manchester Christmas Market. While waiting for the train, saw this member of staff on the platform. A litter picker-upper you may think. Think again! 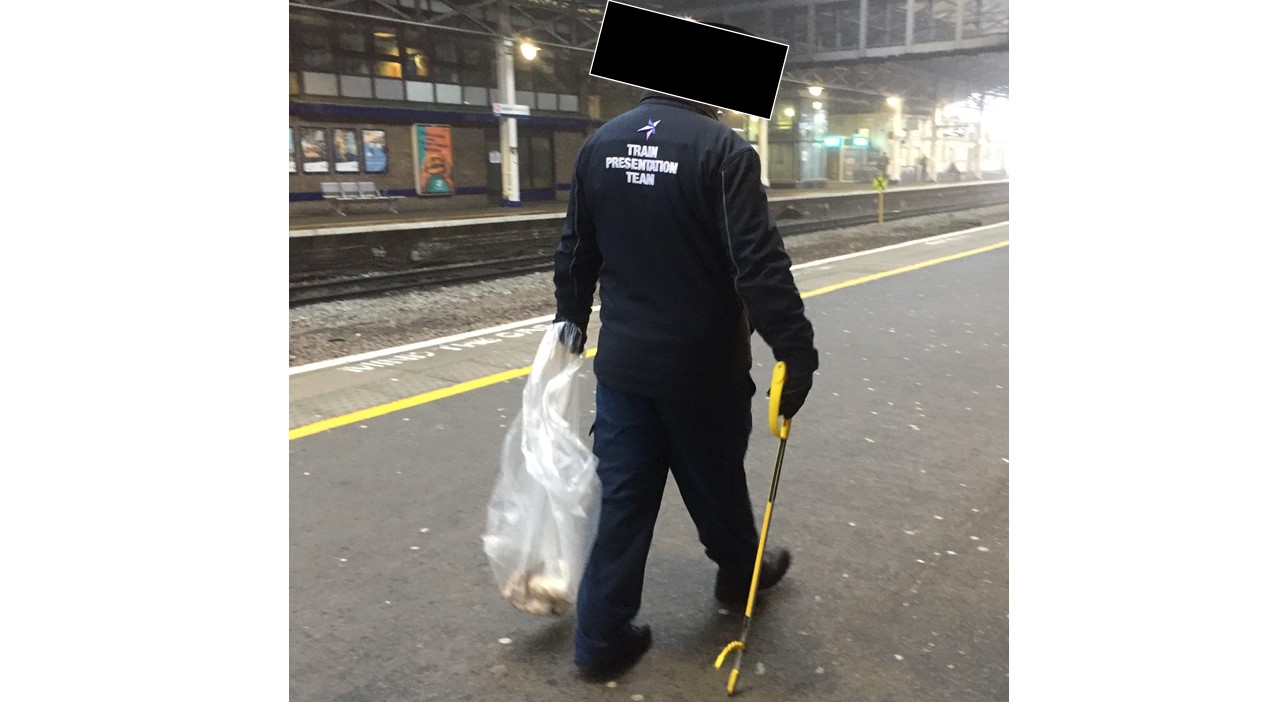